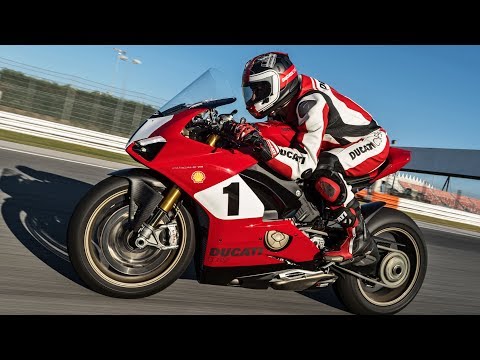 The Panigale V4 25° Anniversario 916 livery takes its inspiration from the Ducati 996 SBK with which Carl Fogarty won the 1999 World Superbike championship. The bike’s graphics are born from the historic collaboration between Drudi Performance and the Ducati Centro Stile.

Engine
The Panigale V4 25° Anniversario 916 is powered by the 1103 cm³ Desmosedici Stradale. A MotoGPderived 90° V4 with Desmodromic timing, this one-of-a-kind engine features a counter-rotating crankshaft and a Twin Pulse firing order. The engine can deliver 214 hp at 13,000 rpm and a torque of
12.6 Kgm at 10,000 rpm, making for extremely satisfying road riding.
The adoption of a dry clutch and type-approved titanium Akrapovič silencers transforms the Desmosedici Stradale that powers the “25° Anniversario 916” into a true object of Ducatisti desire.
The 90° V4 on the Panigale V4 25° Anniversario 916 mounts an STM EVO-SBK billet aluminium dry clutch. Compared to a wet clutch it ensures, during extreme track riding, more efficient anti-patter performance, even during aggressive downshifting, and greater fluidity during ‘off-throttle’ phases. It’s also possible to personalise the degree of ‘mechanical’ engine braking by selecting a different secondary spring from among those in the Ducati Performance catalogue. An open carbon fibre clutch cover, mounted as standard, is a throwback to the days of the Ducati 916, resulting in that classic metallic sound loved by all Ducatisti. The exhaust signature of the Desmosedici Stradale is enhanced by the type-approved titanium Akrapovič silencer. A full 0.5 kg lighter than the one on the Panig