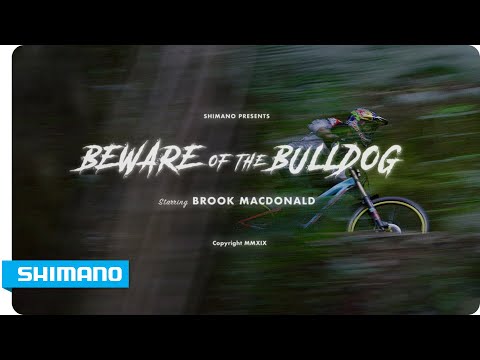 This video was originally supposed to release in early September but after the crash at Worlds, myself, Shimano and the crew at Anthill Films decided that we should postpone it until I knew more about my injury. I’m now happy to say I’m doing great in my rehabilitation and feeling stronger every day. I’ve been blessed with immeasurable support from fans around the world, the mountain bike community, my friends, my family and my girlfriend Lucy. So many people have sent me messages and well wishes, it really has gotten me inspired to come back to downhill racing sooner and stronger.

From the bottom of my heart, thank you. — Brook (Bulldog) MacDonald

As one of the top-ranked downhill racers in the world, New Zealander Brook MacDonald knows a thing or two about riding a mountain bike really fast. So fast that a slight error in line choice on the trail can have potentially devastating consequences for both bike and body. It was Brook’s aggressive riding style – as well as being able to walk away from many of his crashes unharmed – that earned him the nickname of Bulldog. With his stout rugby player physique, one can only imagine what his bikes would say if they could talk.

Share your thoughts about this video by liking it and posting your feedback in the ‘Comments’ section below.

Thanks as well for checking out the official #RideShimano YouTube channel! You can subscribe to all our videos here http://po.st/xxwsT1 via the red ‘Subscribe’ icon in the top right-hand corner.