Around the World on a Pedego | Love Stories | Pedego Electric Bikes 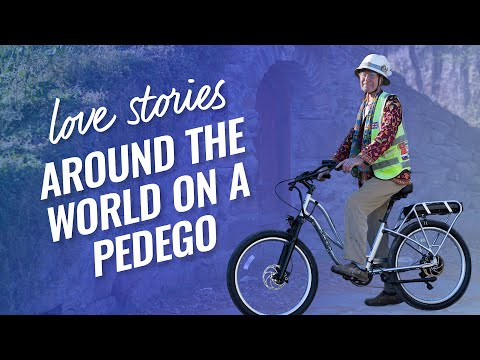 David Hayles is a stage IV cancer survivor in his 70’s. That didn’t stop him from traveling all the way around the world on a Pedego.

In less than a year and a half, the self-described “eccentric, old English fool” Pedego’d over 21,000 miles through 28 countries!

Along the way, he inspired countless others to live life to the fullest, despite any challenges.

David’s message is simple, “Never give up!”

“My particular stupid thing was to bicycle around the world, but there’s loads of other things you can do,” he advises.

“Just get on and enjoy life, rather than sit down and give up. You should never give up!”

According to David, the highlight of the trip was the people he met. Everywhere he went, people wanted to take a selfie with him, and he was touched by their warm-hearted hospitality.

“Everybody was not only friendly, but they tried to be as helpful as they could as I made my way through the journey,” he remembers. “That was the joy of the journey.”