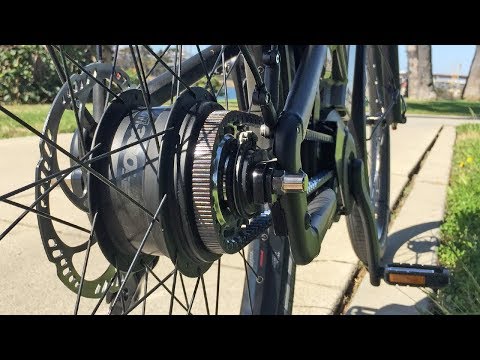 https://electricbikereview.com/forum/threads/enviolo-nuvinci-cvp-hub-overview.25650/ This review shows the Enviolo N380SE but talks about the N380, N360, and N330 continuously variable transmission planetary hubs powered by NuVinci. These CVP drivetrains allow for shifting at standstill, they tend to be more durable than a traditional cassette + derailleur, and they are starting to popup on more ebikes and bike share programs like Jump and Motivate (bought by Uber and Lyft respectively). This is especially true for the Enviolo N330 model, which is also appearing on the Moustache Lundi value model at shops. The following video and specs come from my own research, input from Chris Nolte, and some conversations with Avelino Rivera of Fallbrook Technologies (Enviolo/NuVinci) who is a Business Development Lead for North America and Bikeshare Globally.

The big takeaways for me are that this is a stepless system that can be adjusted while pedaling or at standstill. The NuVinci optimized products are labeled as Continuously Variable Planetary hub systems (CVP) but also sometimes referred to as Continuously Variable Transmission. It’s the same sort of technology used on the Toyota Prius, to optimize motor RPM and reduce energy loss and transmission wear compared to set gears.

– The Enviolo name is a modification of the root acronym NVO, which stands for “NuVinci Optimized” and thus, almost makes the name recursive. Fallbrook Technologies is the parent company here, and as they applied the NuVinci technologies to more applications and really started focusing on bicycles and electric bikes, they began calling it NuVinci Cycling but then moved to a new more unique name to apply specifically to the cycling space, and that is how we got Enviolo.
– As a planetary system, the insides of an Enviolo hub include spheres that orbit the center axle. The system is not being produced in 135mm hub spacing with a 10mm threaded axle for the standard N330, N360, and N380 products as well as 135mm, 142mm, and 148mm hub spacing with a 10mm threaded axle for the N380SE (Special Edition) to be used with wider dropouts and Boost hub spacing.
– The SE model offers wider hub spacing options as well as a higher torque rating of 100 newton meters continuously and up to 120nm peak. It’s a product that targets sportive and cargo bike applications and is well-suited to the Bosch Performance Line CX motor, which produces up to 75 newton meters of torque.
– Enviolo has moved towards an all-black look with their hub and shifting mechanism, the older NuVinci shifter was called the Nfinity C8 and had a silver casing
– The weight of traditional cassette + derailleur is usually somewhere between 1lb-2lbs while the Rohloff Speedhub is roughly 4lbs (1,820 grams) and the Enviolo N380 is roughly 5.5lbs (2,400 grams). Part of what contributes to this weight is a special traction fluid inside, made by Valvoline.
– Sometimes, the Enviolo NuVinci system can feel sluggish or soft when pedaling and I’ve been told that there is a break-in period of ~500 miles where it may not be operating at optimal efficiency… but the addition of traction fluid and the orb pivot system vs. gears just isn’t as crisp and quick as a derailleur + cassette or most planetary geared hubs.
– Maintenance on the Enviolo NuVinci optimized hubs for bikes appears to be very low. There is no specified maintenance interval for this product, vs. the Rohloff Speedhub which recommends changing the oil every year or so depending on use. There is no bleed valve on a NuVinci hub for owner servicing. The most vulnerable and wearable parts on the system appear to be the shifting mechanism and two cables that are utilized in changing gear ratios. The Harmony and HSYNC electronically shifted NuVinci products probably require even less maintenance, aside from battery care, because they use much shorter shifter cables and only a single electronic wire.
– Part of what makes these systems so tough, especially the mechanically shifted Enviolo, is that there’s no derailleur hanging down off of the side. If the frame gets banged into a rack or pole, or maybe the bike tips over, the drivetrain won’t get damaged or go out of tune as easily.

More details can be found in the forum post, linked at the start of this description.