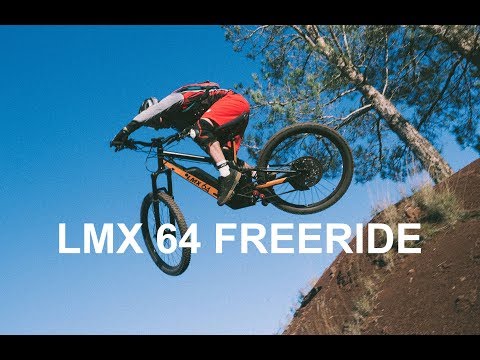 For two days in January 2019, we loaded up the van with two LMX 64 and went shooting a freeride video with French Rider Fred Austruy.

Fred has been here from the start of MTB in France, and has been competing in slope style events such as FISE montpelier and others.
He still has the style!

We have been shooting in 3 different locations around the lake. it does not seems but the temperature in the morning was below freezing!

Fred was very positive about the bike, especially the fact that the motor allowed his to get more down runs without being exhausted.

The suspension performed well in the jumps with no tuning, even for the bigger drops and landings. Unfortunately, it was very windy so many jumps were too dangerous to send!

In the end it was a very positive trip with good images, soon to be released video and positive feedback about the bike from a pro rider.

The LMX 64 is a freeride electric bike, using a technology patented by LMX, with two chains and two freewheels on the back wheel. This system allows to run hight power and torque without stress to the normal bike drivetrain.

The LMX 64 is equipped with a removable 850wh battery, precise troque sensor control, separate hand operated throttle control, 180mm of travel at both wheels. The total weight is between 26 and 28kg depening on the component choice.

The LMX bikes are created in France, with in house development, production of the frames and assembly.

Visit our website for the full specs of the LMX 64 :