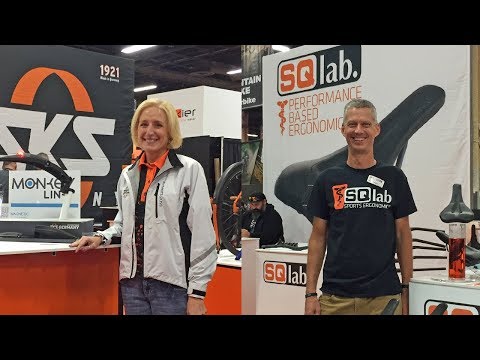 For 2018, SKS is offering a wider range of aftermarket bicycle fenders (including different sizes and colors). I met with a company rep named Crystal and also had my friend Chris Nolte on hand to talk about what this might mean for people who want to do a conversion themselves to stay dry and clean. Colors included solid black or striped silver, red, green and blue. It seemed like these fenders were higher quality than some alternatives I had seen, and I like that they had extra support struts to reduce rattling noise.

SKS is now offering a bike wax, bike wash, pumps, and now magnetic lights and fenders which are easy to remove. The MonkeyLink products are designed to be easily added or removed from electric bikes (that have the interface preinstalled) and use energy from e-bike batteries vs. their own standalone power source. When MonkeyLink is already setup on an electric bike from the original equipment (OE) then it is called Connect, and the magnetic interface is already in place… so you just buy whatever compatible accessories you want. If you already have a bicycle (regular or electric) you can get the Recharge system, which uses the same MonkeyLink accessories but acts as a power bank because it is not wired in and a main battery may not be present. So you could use SKS Connect if it’s pre-installed or do the SKS Recharge system yourself and charge using USB vs. running off an existing battery. All of this should become available in January of 2018 and I saw some electric bikes at the show that already had this technology in place. Most notably, Bulls electric bikes had it.

We also looked at this new front fender option called the XGuard which Velcro’s onto the downtube and has a long enough strap to go around big battery packs. We also looked at the Anywhere Adapter for adding a water bottle cage to an electric bike if it doesn’t have bottle cage bosses. We saw the SAM (suspension air mechanic) pump and the mountain suspension pump which have gauges so you can fill to precise levels.

It turns out SKS is partnered with SQ Lab and is their distributor in the USA. Both are German brands. I asked what SKS stands for and they told me it was named after the founders, they have been in business since 1932 making curtain rods! Anyway, the first bicycle product was a pump and that is still one of their main product lines, they even spec pumps that come with bikes.

Next, I met with Mark from SQ Lab and he introduced their new saddle concept called ERGO-Lux. It sounds like this new product is an evolution of the ERGO-Wave design which has a lowered front. The saddle is designed to cradle your sit bones. The 610 Ergo Lux is meant to be an all-around design with a more upright position, possibly more padding and comfort on a longer ride. They do also have a wider, even softer comfort version… which follows the same design philosophy, this one is called the 602, which also has a pivot to help ease your hips. Apparently, when people walk, their pelvis moves about seven degrees and this saddle tilting feature relieves pressure on your vertebrae when sitting and pedaling. It’s good to remember that saddles which are too soft can put pressure on your perineum and what you really want is for the pressure to be on your sit bones, and this is why the SQlab saddles are sort of stepped forward.

You can learn more about the company at their official websites: http://www.sks-germany.com/ and https://www.sq-lab.com/